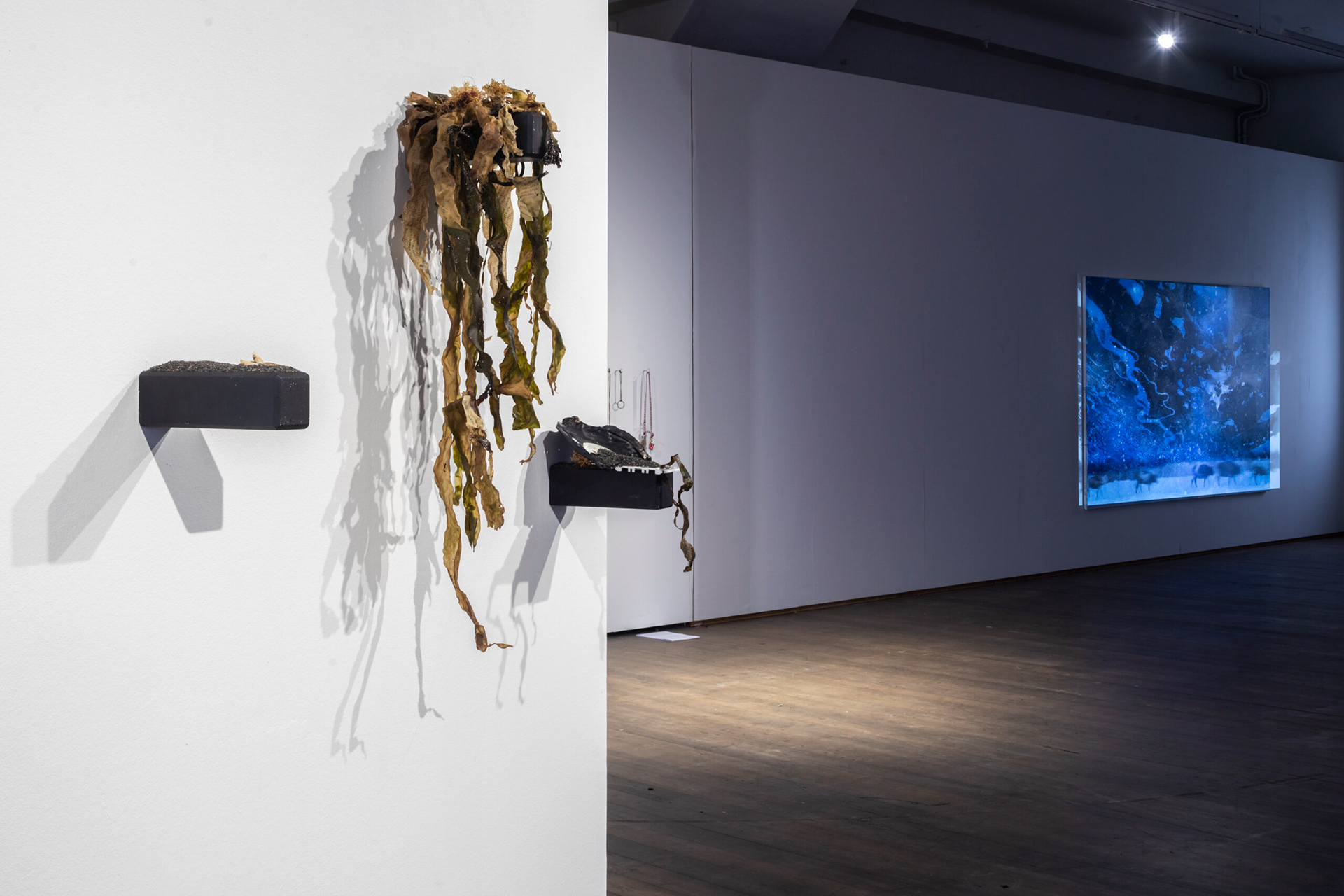 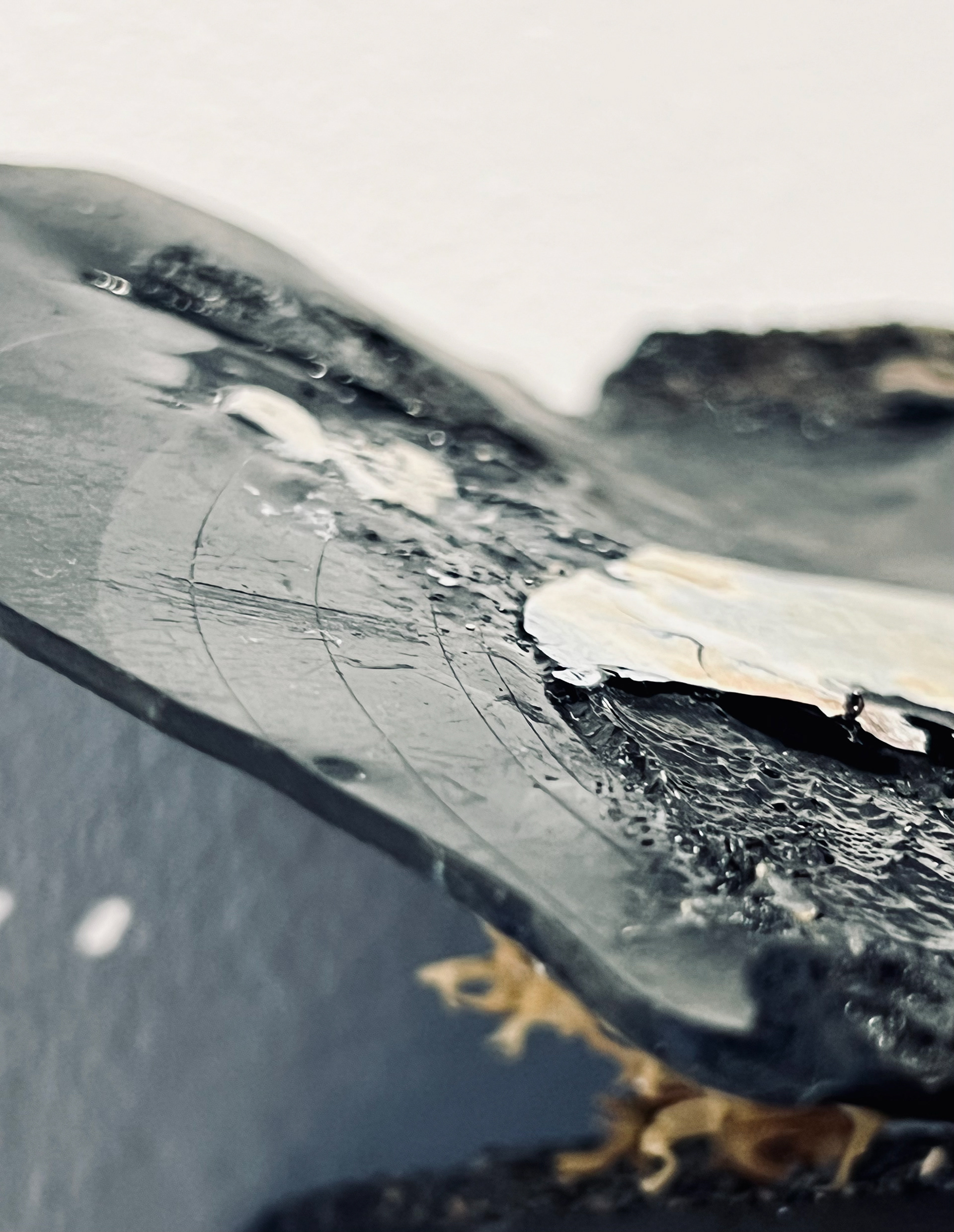 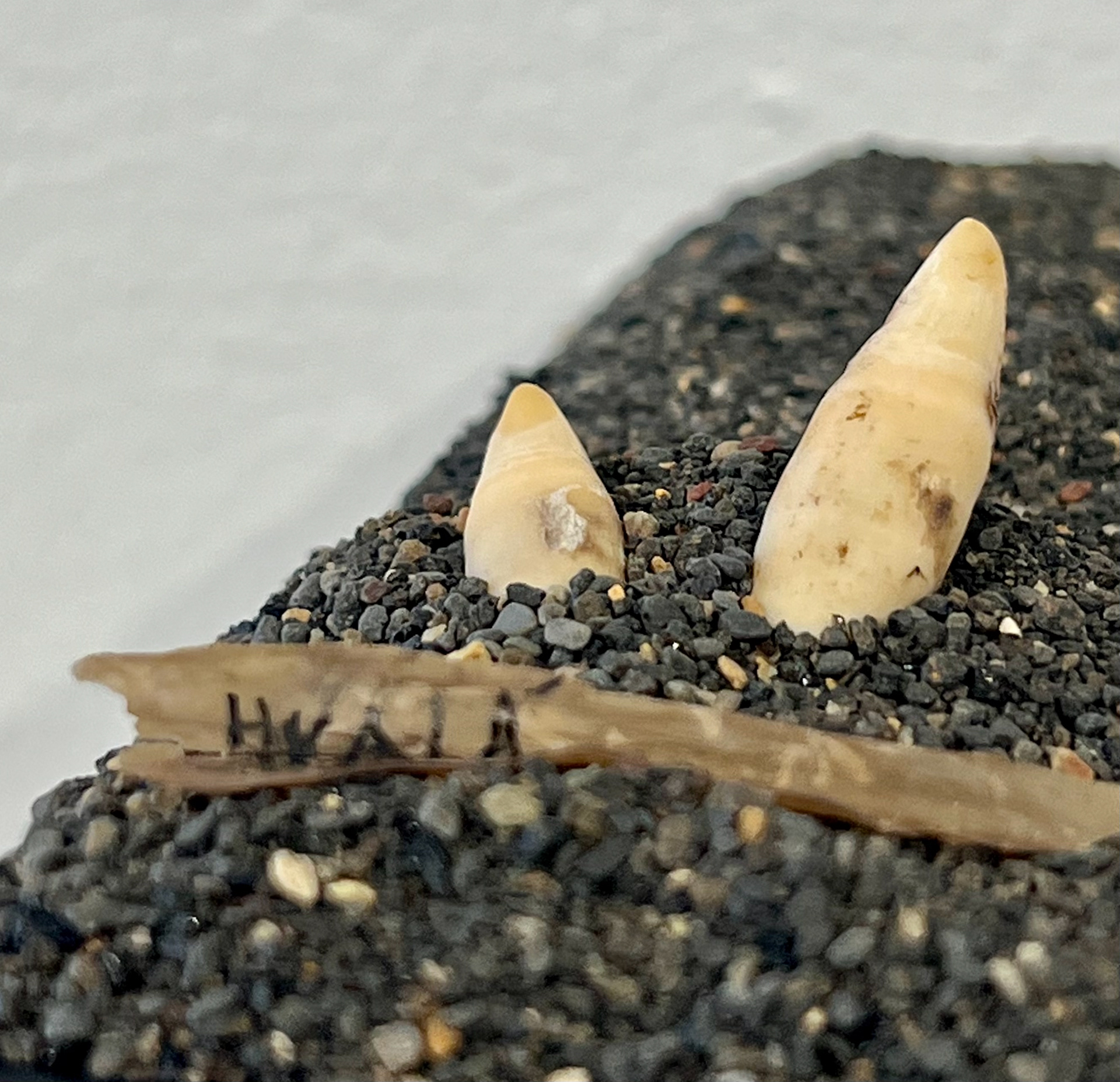 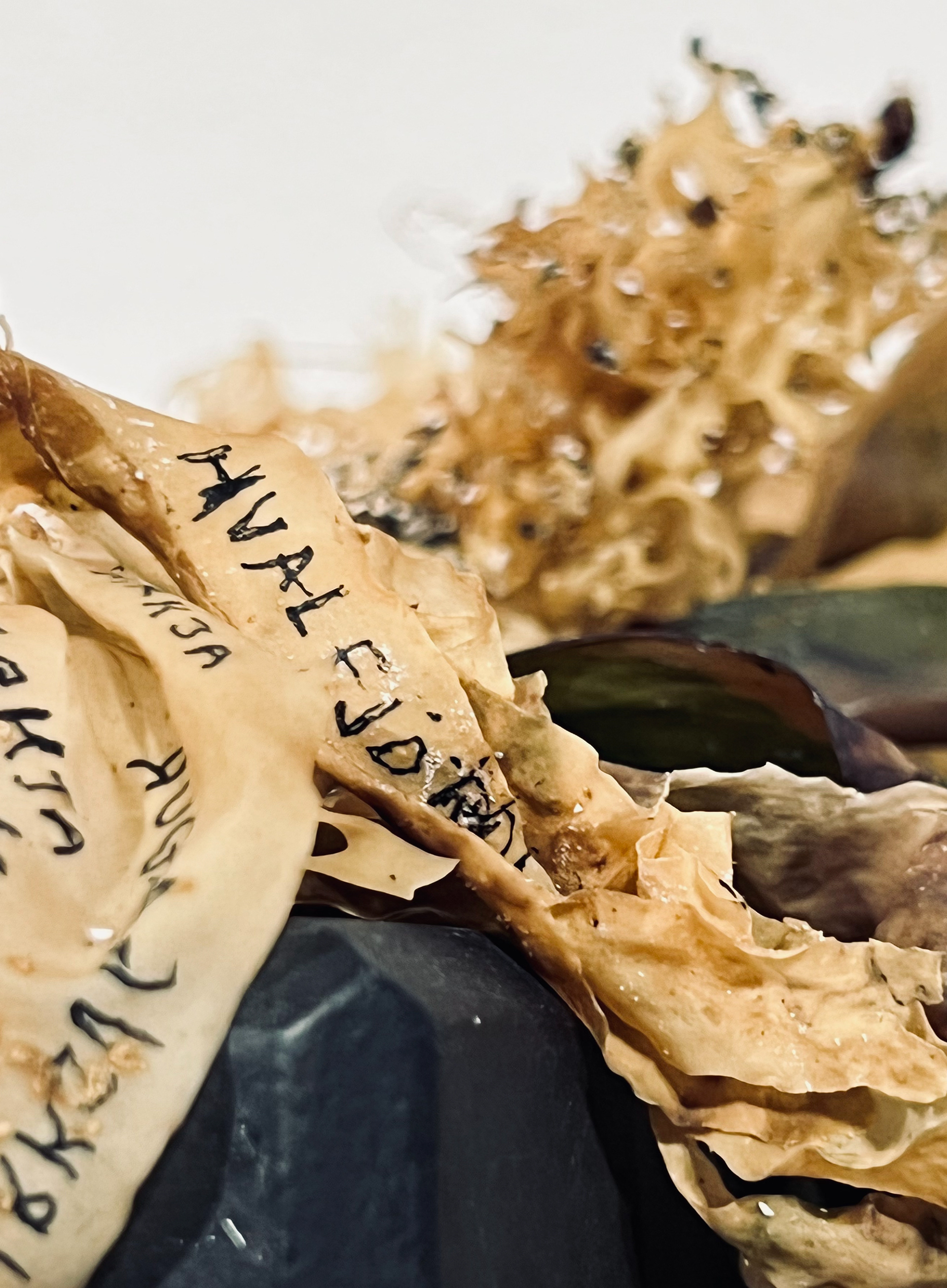 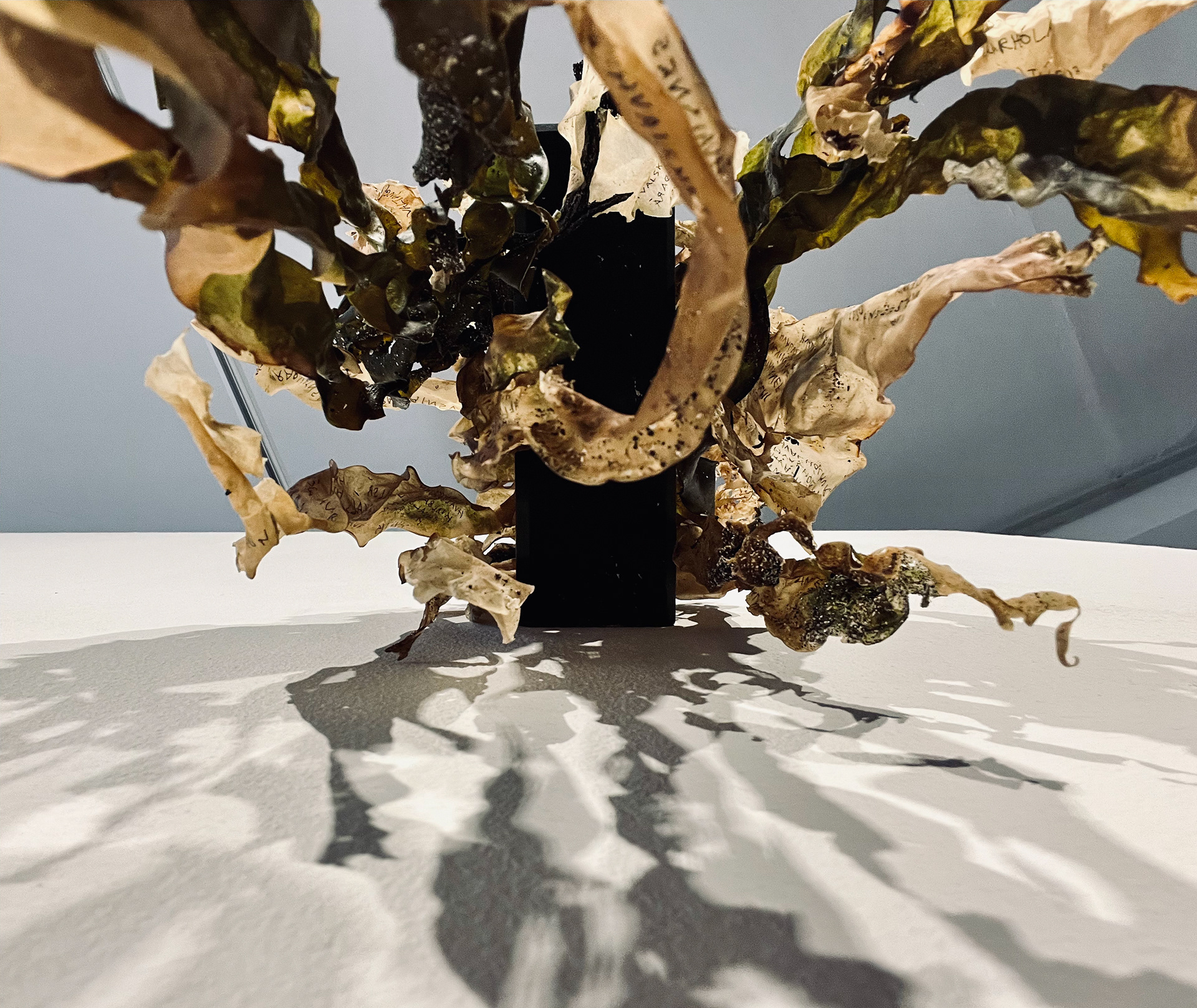 Installation: Libretto, sound composition, found objects, toponymy.
Librettist and artist: a rawlings
Composer: José Luis Anderson
CHEWING THE TUNDRA, 3 NOVEMBER TO 17 DECEMBER 2022
Chill Survive Network curated CHEWING THE TUNDRA, a group exhibition at Kunsthall Exnergasse (Austria).
Hval: Whale.
Lag: Song.
Slag: Scape (ie. Landslag, landscape).
As a libretto-installation, HVALSLAG dwells on the increased occurrence of mass and single whale strandings in Iceland due to marine heating, persistent organic pollutants, military exercises, following prey (mackerel, squid), and/or following diseased herd leaders. The Marine and Freshwater Institute recorded nine hundred sixty-two cetacean strandings in Iceland from 1981-2019, with pilot whales (Globicephala melas) comprising half of that tally due to seven mass-whale strandings (Halldórsson et al. 2019). Pilot whales largely stranded on Iceland’s southwest coastlines, which coincidentally is in proximity to half of Iceland’s human population. Icelandic law stipulates that deceased whales become the responsibility of the landowner. This law is centuries old, created to support the right to hvalreki—or the sustenance and fuel a beached whale provided humans in past centuries.
Using Icelandic language as a point of inquiry (where whale/hval sounds like suffering/kval), HVALSLAG hinges on two hundred Icelandic place names that contain the word hval. Human-cetacean interactions in Iceland have been encoded within Icelandic toponymy, with bays, peninsulas, and even a fjord featuring the Icelandic word for whale (hval). How does the word hval provide a sense of the grandiose, of the mythic, of the monstrous, of the imponderable, of the sustainable, of the unknowable within its attachment to place? Toponyms engage less so with the actual signifier hval but rather with the socio-cultural semantic halo that circles this collection of letters.
The place names form a libretto, transformed into sound composition by José Luis Anderson for HVALSLAG’s installation. The names are also visually juxtaposed with items collected from Iceland’s shores over the past decade by the artist. HVALSLAG’s archive of strandings includes a vinyl record, destroyed cassette tape, whelk eggsac, and teeth extracted by the landowner from a mass whale stranding 2019 hvalreki. Artistic research contributing to HVALSLAG arises from where Marilyn Strathern argues that anthropology is about “the Relation” (1995) and Fiona Templeton posits that “theatre is the art of relationship” (Templeton 1990). This relationality extends to consider how the practice of becoming-with can inform a human and more-than-human interrelation.
This work acknowledges the support of RANNÍS, Carlsbergfondet, and HM Queen Margrethe II’s and Vigdís Finnbogadóttir’s Interdisciplinary Research Centre on Ocean, Climate and Society (ROCS).